The History of Custom Car Wraps

People have always craved a way to make their mark on their vehicles. During the 19th century, hand lettering and painting on race cars and trains for distinction was common. It wasn’t until the turn of the 20th century that things took a more commercial turn. More and more hand painted signs advertising on the side of buggies and horse buses started appearing. 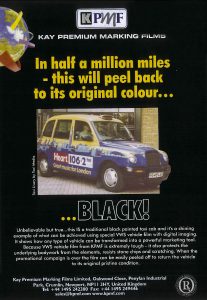 In 1926, the Goodrich Company hired a scientist who created a revolutionary product for advertisers- Vinyl Chloride. Although still costly for most business, larger clients such as the US Military were able invest in the technology. They opted for new vinyl markings instead of traditional paint on their planes and equipment.

By the 1950’s more companies had begun investing in vinyl chloride technology and brought down costs with new innovations in vinyl graphics.

In the 1990’s, German taxi owners were facing a problem and came up with a crafty solution. German law required all taxis be the same beige. Taxis had to be repainted before service, majorly reducing the overall resale value of the vehicle afterwards. With this in mind, Kay Premium Marking Films crafted the first full-body solid color vinyl wrap for the German taxi owners. The dull legally-bound beige could be stripped away after three years of service to reveal the old paint undamaged below.

A massive, innovative marketing campaign was for Crystal Pepsi in 1993 with a California bus being transformed into a rolling billboard for the new product. Designers had played with hand-painting the ad, but eventually created the world’s first photo-realistic, computer generated bus wrap. Although Crystal Pepsi flopped, the advertising campaign and resulting vinyl wrap technology has had long lasting effects in the vehicle graphics and custom car wraps industry.

Without a doubt, vehicle graphics are now one of the most popular and effective methods of modern advertising. At Pensacola Sign, we’ve invested in high-quality 3M vinyl and modern printers to deliver an outstanding final product. Contact us to start making history with custom car wraps today!